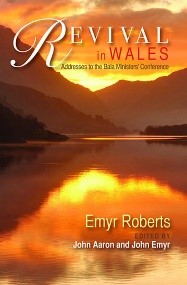 This volume will be welcomed by all who are interested in the topic of religious revival and its consequences. The volume is published to record the one hundredth anniversary, in 2015, of the birth of Emyr Roberts (1915-88). Although over a quarter of a century has passed since the author’s death, the six addresses chosen for this volume are as relevant and far-sighted aswhen first delivered. These addresses presented something of the wealth and excitement of the Christian faith as experienced by Welsh-speaking believers of the past under the leadership of men such as Williams Pantycelyn and Robert Roberts, Clynnog. To many of the ministers present at the annual EMW Ministers’ Conference, these occasions opened their eyes to ‘the great works of God’ in their own country, and this publication will provide a similar service to many today.

These lectures by Emyr Roberts offer a fascinating and heartwarming account of God’s workins among the Welsh Calvinistic Methodists. The examples of William Williams, Pantycelyn, and the Methodist societies remind us that biblical Christianity is not just to be understood but experiences, and that in community with others.

From 1960 to 1971 he was the editor of Y Cylchgrawn Efengylaidd (The Evangelical Magazine). Amongst his publications was one which won for him the Dyffryn Clwyd National Eisteddfod Prose Medal in 1973.

Reflections on the Swansea mission